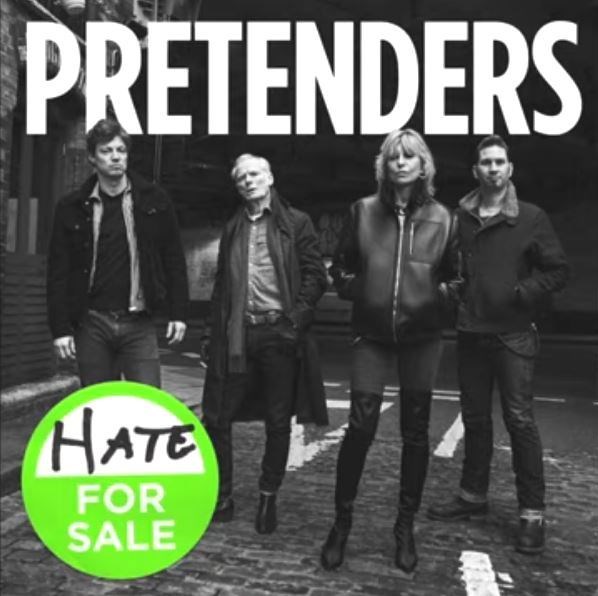 Why review even a new album by a 40-year-old rock ’n’ roll band?

Because a new Pretenders album is worth it, that’s why.

And Hate For Sale earns a listen because Pretenders frontwoman Chrissie Hynde is still cranking up her own particular brand of rock ’n’ roll decades after giving us FM radio classic like Brass In Pocket, Talk of the Town, Middle of the Road, Back on the Chain Gang, and 2000 Miles, which still one of the very best original Christmas songs in modern times.

New rocking tunes like The Buzz, I Don’t Know When To Stop, Didn’t Want To Be This Lonely and particularly Maybe Love Is In NYC are Pretenders music, ready for rock ’n’ roll radio right now (if that even exists anymore). And Maybe Love Is In NYC would make The Byrds proud, which is high praise.

Hynde mixes it up, as she always does, with slower, catchy numbers like You Can’t Hurt A Fool and Crying In Public.

These songs are all written by Hynde with Pretenders lead guitarist James Walbourne, who lends his stinging strings to most of the songs on Hate For Sale.

And it must be said that Hynde’s voice seems to have lost none of its edge and angst; her very real passion for these songs saves the mediocre ones, elevates the best ones.

The only complaint about the new Pretenders album is its length, clocking in at just under 31 minutes. Despite the fine quality of most of these songs, that’s not a great deal of music for your $15 to $20 CD purchase, or $30 for an LP.

But most of these short rock ’n’ roll songs should be perfect for the radio.

Hate For Sale is not all Chrissie Hynde, and James Walbourne, have been up to musically during the COVID-19 pandemic, however. They have released nine covers of Bob Dylan songs to help tide us over and get us through these dark days.

This is how Hynde explained it on her Facebook page, after hearing songs from Dylan’s new album, Rough and Rowdy Ways.

“I was so buoyed up by the new Dylan songs that I talked to Pretenders guitar playing hotshot James Walbourne and we decided it’s a good time to do those Dylan songs we’ve always talked about doing,” she said. “Every singer-songwriter in the world covers the master's songs and there is an endless supply of them. So we’ve started, and will do one a week until lockdown ends.”

The thing about covering a Dylan song is that chances are pretty good the new version will sound nothing like the original; the tough thing is that the original usually sounds pretty damned good, so the bar is high. (What was the Columbia Records motto — Nobody Sings Dylan Like Dylan.)

But Hynde and Walbourne are smart about it on the Dylan Lockdown Series; they don’t tackle Dylan’s greatest hits, but really good songs that deserve another listen from the man’s vast catalogue of folk music, blues, love songs and his general rewriting of the great American songbook.

So we get In The Summertime and Every Grain of Sand from 1981’s Shot of Love, You’re A Big Girl Now from 1975’s Blood on the Tracks, Standing in the Doorway from 1997’s Time Out of Mind, Love Minus Zero/No Limit from 1965’s Bringing It All Back Home, Tomorrow is a Long Time, a live Dylan performance from 1963, Sweetheart Like You and Don’t Fall Apart On Me Tonight, both from 1983’s Infidels, and Blind Willie McTell, recorded for Infidels but inexplicably left off the album.

The versions of these songs are excellent, and Hynde isn’t afraid to lend a woman’s perspective to songs written by a man — even one arguably the greatest American songwriter of the last 60 years.

To this point, they are available only on YouTube and Facebook (with somewhat cute videos), but there’s already been talk about releasing the Dylan Lockdown Series as a standalone album. Or as a companion to Hate For Sale.

There’s still plenty of sting to Chrissie Hynde, and she’s not about to let us forget.

Bob Bruton is a freelance writer who lives in Barrie and contributes to BarrieToday. He remembers Pretenders’ music from 40 years ago, and he hasn’t forgotten it today.

Former Oro-Medonte resident lends talent to new comedy music album
Nov 11, 2020 5:00 PM
Comments
We welcome your feedback and encourage you to share your thoughts. We ask that you be respectful of others and their points of view, refrain from personal attacks and stay on topic. To learn about our commenting policies and how we moderate, please read our Community Guidelines.