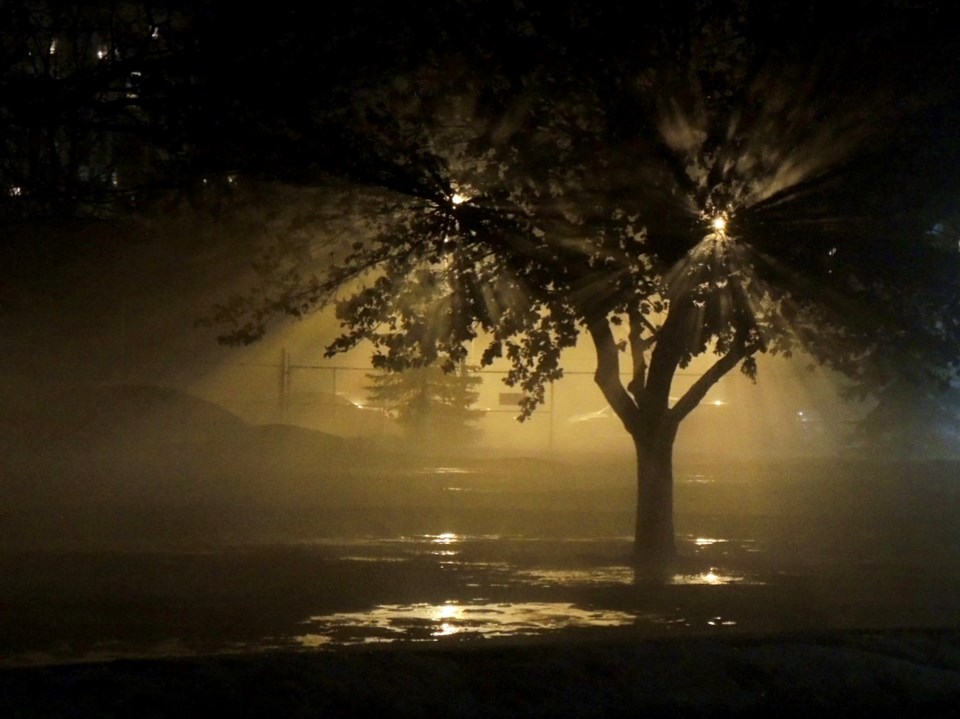 Fog creates an interesting effect with lights from the Barrie Armoury in the background. Sue Sgambati/BarrieToday

A rainfall warning and a fog advisory remain n effect.

Cloudy tomorrow.  Becoming a mix of sun and cloud in the afternoon. High zero.

Daytime temperatures are forecast to be above zero through to next week.

Here are the details of the rainfall warning in effect for:

A further 5 to 10 mm of rain are likely before the rain ends with a cold front passage this morning. Total rainfall amounts from Monday night through today will likely be in the 40 to 60 mm range. Isolated amounts approaching 75 mm are possible.

This wet, record mild spell in combination with snowmelt is causing localized flooding across Southern Ontario.

If visibility is reduced while driving, slow down, watch for tail lights ahead and be prepared to stop. Keep children and pets away from creeks and river banks.

Rainfall warnings are issued when significant rainfall is expected.

Fog advisory in effect for:

Areas of dense fog are persisting near a warm front draped across Southern Ontario. Visibilities are occasionally reduced to less than 100 metres. The fog is expected to lift this morning with the passage of a cold front.

If visibility is reduced while driving, slow down, watch for tail lights ahead and be prepared to stop.

Sunny in the morning then a mix of sun and cloud with 30 percent chance of showers late in the afternoon. High 26. Humidex 31. UV index 9 or very high.

A mix of sun and cloud with 30 percent chance of showers. High 28.

Based on Environment Canada data