Thousands of pilgrims won't be flocking to the region this summer

'This decision represents the first time in Martyrs' Shrine’s nearly 100-year history that it has not been open to pilgrims'
Jul 2, 2020 12:00 PM By: Andrew Philips 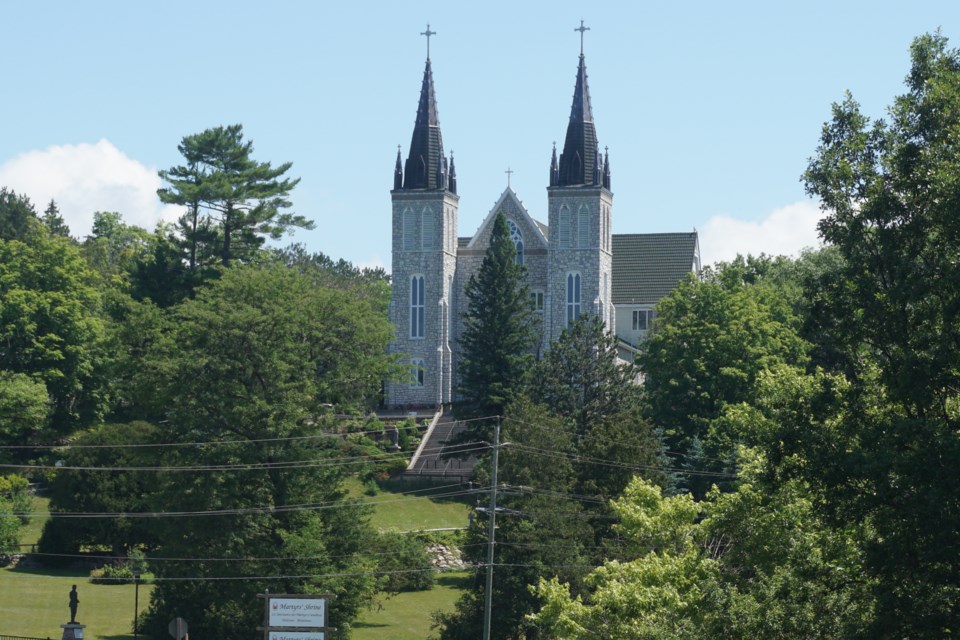 One of the region’s biggest tourist draws won’t be opening this year.

The Martyrs' Shrine season will only continue in the virtual world with its church, grounds and office remaining closed to all visitors for the first time in its nearly 100-year history.

But it almost wasn't a done deal, according to Martyrs' Shrine marketing and communications manager Allex Laurin.

"The shrine did consider opening to the general public without pilgrimages," Laurin said. "In fact, this was part of our plan to reopen July 4. Although we do see many visitors on pilgrimage days, much of our attendance from the general public is comprised of members of these same communities, and though their community’s pilgrimage would be cancelled, it is still part of the spiritual tradition of each family to come to the shrine annually."

However, Laurin noted that with the current COVID-19 restrictions in place, they forecasted that even with the anticipated drop in attendance and the postponement of pilgrimages until 2021, they would still be turning away thousands of people every day they would be open.

"Much of our decision lies with the actual experience that people would encounter if they did visit had we reopened," he said. "And that would be a site with no public washrooms; relics, statues, and candles, that people come for, roped off and inaccessible, and an atmosphere of 'crowd control,' which would not lend itself to a prayerful experience. We would not want to open and then have the experience feel unwelcoming."

And while the grounds remain closed, staff continue to work remotely and are available by email and telephone to answer questions, process donations, accept prayer requests, and book groups for 2021.

And Laurin said that the present time, the shrine is not anticipating being open before May 1, 2021, which would likely mean it won't be participating in neighbouring Sainte-Marie among the Hurons’ popular First Light event if that gets the greenlight later this year.

Instead, the national shrine will focus its efforts and resources this season on providing prayer, pastoral care, and ministry, through new digital mediums on its website.

Laurin said the Martyrs’ Shrine has a typical operating budget of about $1.2 million, which is funded almost entirely by the generosity of the thousands who come to pray, with the balance raised within the community and through its benefactors.

"As a result of closing, we are without the majority of our usual revenues and in a state of urgency that requires support more than ever," he said. "Taking into account the reduction in operating expenses, and our resources, we are anticipating a shortfall of $358,000 that will need to be fundraised."

In an release, officials ask for donations to continue to help cover the predicted shortfall.

“As Martyrs’ Shrine relies almost entirely on the generosity of those who visit in-person to support its mission of prayer and healing, we now have an urgent need for donations,” the release states. “We ask those who can, to help protect our mission today, so that we may continue our work and be present for you tomorrow. It is our belief that the scope of prayers made through the intercession of St. Jean de Brébeuf and his companions reach far beyond the gates of Martyrs’ Shrine.

“Though pilgrims will not be able to be physically on-site, we will ensure they can remain connected to Martyrs’ Shrine in other ways. The Jesuit Fathers who serve the apostolate are increasing their ministry of prayer by accepting petitions, requests, and Mass intentions, to be prayed for next to the relics of our martyrs, through our website, and will continue to serve in a variety of out-reach ministries throughout the Archdiocese of Toronto and beyond.”

Provincial cash could help prevent tax increases, service cuts: Mayor
Aug 13, 2020 4:00 PM
Comments
We welcome your feedback and encourage you to share your thoughts. We ask that you be respectful of others and their points of view, refrain from personal attacks and stay on topic. To learn about our commenting policies and how we moderate, please read our Community Guidelines.