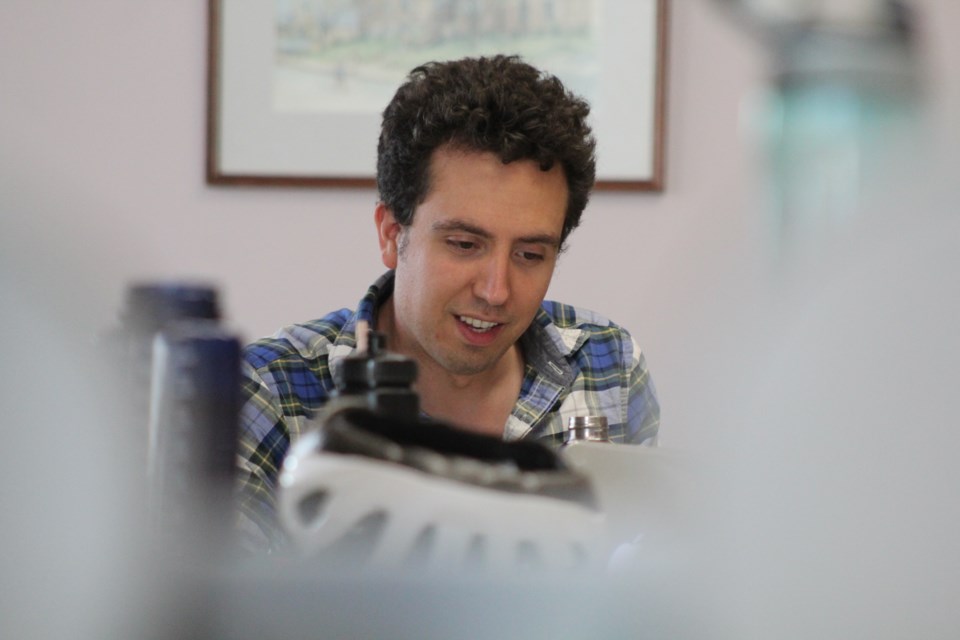 Theatre by the Bay artistic director Iain Moggach is shown in a file photo. Raymond Bowe/BarrieToday

Theatre by the Bay is streaming live Sunday evening with a reading of the winning submission of its 24 Hour Playwriting Contest.

Midland’s Brendan Main won last weekend’s contest with The Devil Came Down to Midland, a half-hour play about a young woman meeting the devil at the crossroads of highways 12 and 93. The event was part of Barrie’s Culture Days events.

Main, who has been involved in other Theatre by the Bay programs, won $500 along with the reading of his play.

The library technician, who lives in Midland, writes sketch comedy and fringe plays, often in collaboration with his wife, Colleen Waltenbury, and he’s participated in 24-hour film challenges. The Barrie contest, he said, was an extension of that.

“It’s a different beast, though, because it’s not collaborative,” said the Midland man.

Participants were given a set of challenges to incorporate into their play, meaning they couldn’t prepare ahead of time.

He’s pretty excited about Sunday’s reading and is impressed with how fast organizers are able to pull the whole thing together.

“Everything about this has been triple charged,” he said. “They’ve got more done than sometimes I get done in a month.”

As runner up for his play, Diet Cherry Cola in the Sky, Robbie Woods won $200. In total, there were 32 submissions.

Typically, the theatre company is deep into its season by this time of year, but the pandemic forced the cancellation of the season and prompted organizers to pivot and look for other opportunities.

Sunday’s reading will be the Barrie theatre company’s third online event and all have been deemed successes.

In May, Bring the Bay Home was a cabaret fundraiser and the theatre company hosted its inaugural Emerging Director Project shortly after.

“It was a nice way to get our presence out there,” said Moggach, adding the non-profit has been building its online presence since emergency measures were imposed in March as a result of the health pandemic. “What makes it special is that it’s a live experience… doing an online live performance is the closest we can get to a live performance.”

It also comes with some benefits. Theatre by the Bay can thank sponsors live and also create conversations, accepting feedback.

It’s a whole new approach allowing the theatre to continue to flourish. While there are challenges with physical distancing and other restrictions still in place, the theatre company can still push on.

Those restrictions are top of mind as the company looks to the next season and its theatre offerings.

The Devil Came Down to Midland can be streamed live Sunday at 7 p.m. on Theatre By the Bay’s YouTube channel.

Fourteen Barrie residents among 29 new COVID cases in county today
Nov 26, 2020 1:51 PM
Comments
We welcome your feedback and encourage you to share your thoughts. We ask that you be respectful of others and their points of view, refrain from personal attacks and stay on topic. To learn about our commenting policies and how we moderate, please read our Community Guidelines.