County of Simcoe launches Letters to Seniors, a new program where kids can write letters back and forth with local residents of long-term care homes
0
Mar 26, 2020 7:30 AM By: Jessica Owen 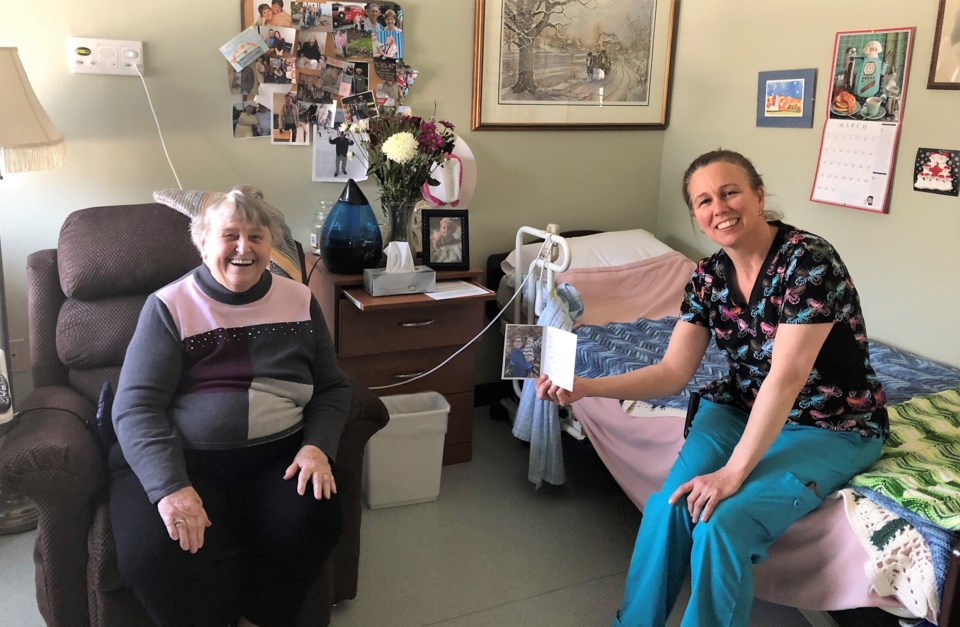 Lynn Arsenault, left, and personal support worker Crystal Zaharopoulos show off the letter Arsenault received as part of the Letters to Seniors program at Trillium Manor in Orillia. Contributed image

A new community effort can have your kids practise their writing skills while putting a smile on the face of a senior.

It’s been two weeks since the County of Simcoe’s long-term care and seniors services launched a new program called Letters to Seniors, a pen-pal program to encourage school-aged children to write to residents of county-owned long-term care homes.

Now, letters are starting to flood in to local homes, and the residents couldn’t be happier to receive them.

This week, Lynn Arsenault, 76, a resident at Trillium Manor in Orillia, received a letter from Tally and Cindy from Everett, Ont.

“They wrote that they wanted us to know they were thinking about us and they wanted to send us a smile,” said Arsenault. “There’s a picture of them.”

When Arsenault received the letter, she describes how she felt.

“I felt wonderful, because I love children. I have seven,” said Arsenault. “I feel like a kid in a candy shop!”

As long-term care homes aren’t currently allowing visitors due to the COVID-19 pandemic, Arsenault hasn’t been able to see her own children in a while, although she says she’s able to use Facetime on her iPad to see them.

The letter has helped lift her spirits, and she says she intends to write one in return.

“Maybe I’ll write about some of the things we do here each day, and I might ask them some questions about what they like to do,” said Arsenault.

Crystal Rosewell, program and support services supervisor at Trillium Manor, says Trillium has received about eight letters through the program so far over the past two weeks, but they would love to get more.

“I think this makes (residents) feel like people in the community are thinking about them, and it makes them feel like they’re not forgotten and that people do care about them,” said Rosewell. “It’s a program we’re hoping we’ll be able to continue.”

“It definitely helps to bring back some joy, since they’re missing the connection they had to the community right now,” she added.

As letter writing is a skill Rosewell says has almost become extinct, she hopes the program will see both the writers and recipients get something new out of it.

“When you get a letter, it’s something that almost slows you down a little bit and you know someone has had to put some time aside to think about you and what they’d like to write,” she said. “I think that’s what really impacts people; that caring piece.”

Rosewell also clarifies that all letters coming into the homes are sterilized before they are distributed to residents.

To take part, children are asked to write a letter introducing themselves to a resident. Support Services staff will review and connect the student with a match at the home.

If you would like to participate with your kids, please send your letters to one of the following addresses, Attn: Pen Pal Program.

Emergency wage subsidy proposed for Canadian businesses
Apr 3, 2020 6:00 PM
Comments
We welcome your feedback and encourage you to share your thoughts on this story. We ask that you be respectful of others and their points of view, refrain from personal attacks and stay on topic. To learn about our commenting policies and how we moderate, please read our Community Guidelines.