The number of household contacts of primary cases also doubled from Saturday to 42 people
Jan 24, 2021 3:47 PM By: Raymond Bowe 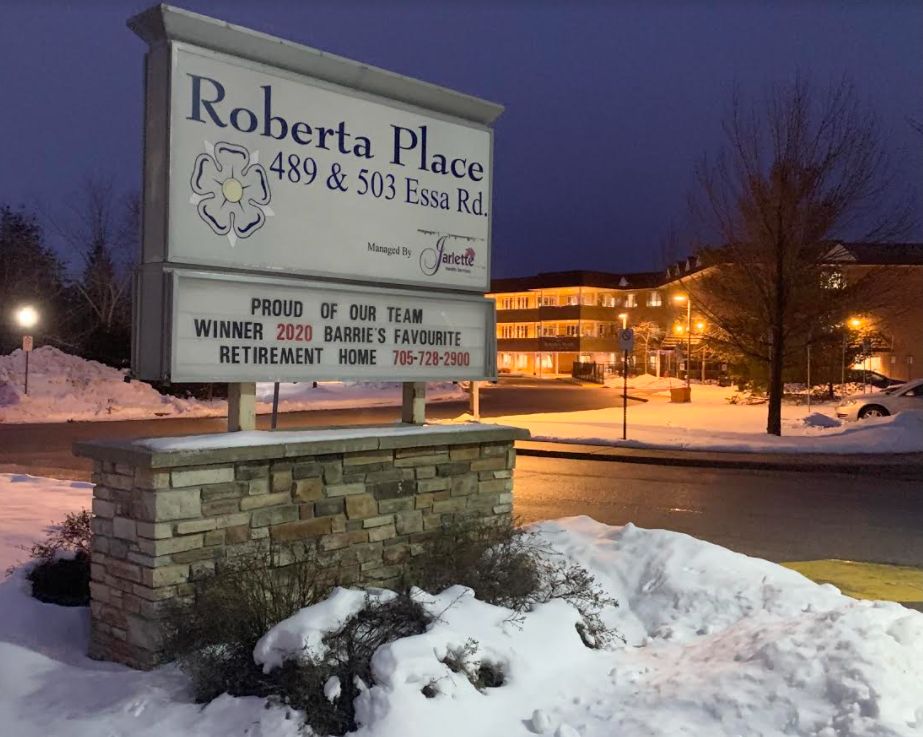 The number of deaths linked to the COVID-19 outbreak at Roberta Place in south-end Barrie, where the United Kingdom variant has been confirmed as the source, jumped overnight to 40 residents.

It was reported on Saturday there had been 32 resident deaths, which had been an increase of five from Friday.

On Saturday, the health unit confirmed the UK variant as the source of the outbreak at the Essa Road facility.

Although further confirmation is not being sought, Gardner said Sunday he is "fully convinced" that all of the Roberta Place deaths and confirmed cases are from the UK variant.

"I have no reason to believe there is another circulating strain in that outbreak," he told reporters on a Zoom call.

Gardner said there is another reason why further lab testing regarding the genome isn't been undertaken for Roberta Place cases.

"To me, it's not necessary," he said. "I have a high degree of confidence that we are, in fact, dealing with that strain, that variant, for every single case. I don't have any reason to believe otherwise.

"The laboratory system has its limits and its capacity, and I think they're better spent looking elsewhere in the community, and across the province, for other cases," Gardner added. "We really want a a good, strong, robust, broad net searching for this."

There are 127 residents — which is all but two in the home — who have tested positive for the virus. The figure was unchanged on Sunday from Saturday's reporting, Gardner said.

However, the number of household contacts of primary cases doubled from Saturday to 42 people.

There are also 86 staff, which represents approximately half of the staff, who have been infected, an increase of two from Saturday. An essential caregiver is also positive for the virus.

There are still three external partners (workers and physicians, etc., from outside agencies) who have tested positive.

The health unit has said six swabs (five residents and one staff) taken at the Roberta Place long-term care home were identified as the UK variant of the virus after genome sequencing was completed. The second test determined the mutation to be the much more virulent UK B.1.1.7 variant.

The swabs tested included a sample from the first case discovered at Roberta Place, the same one that prompted the outbreak declaration on Jan. 8.

Concerns have been raised about its spread already happening in the community.

"What we have here we probably won't be able to contain," Gardner said Saturday.

There will be ongoing monitoring at Roberta Place through rapid testing by Orillia Soldiers' Memorial Hospital (OSMH), which has been granted temporary leadership of the long-term care home. This will be done on a twice-weekly basis.

The health unit announced Sunday it is also investigating a possible UK variant exposure at Bradford Valley Care Community following a confirmed case of the variant in a Simcoe-Muskoka resident. A provincial testing laboratory notified the local health unit late Saturday about the new case.

Health officials say the individual had close contact with a person who is also part of a COVID-19 outbreak at Bradford Valley Care Community, a long-term care home in Bradford West Gwillimbury.

The COVID-19 outbreak was declared at Bradford Valley Care Community on Jan. 14. As of Jan. 23, four residents out of 230, and three staff out of 260, have tested positive for COVID-19; further testing will be done to determine if this is the UK variant.

The agency is also investigating other connections to the individual who tested positive for the UK variant, including a curbside-only retail setting.