Pandemic reveals importance of growing your own food: Farmer

'We need to look at what our grandparents used to do. All that knowledge has been lost and we need to get it back,' says local aquaponics proponent
Mar 31, 2020 9:00 AM By: Kari Klassen 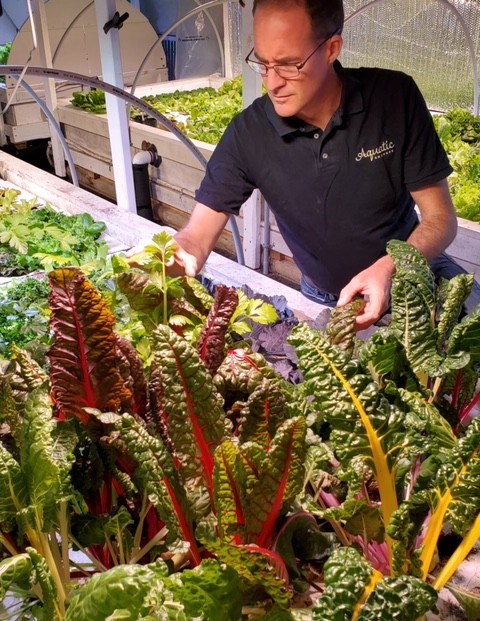 Scott Allin, owner of Aquatic Growers, has some tips for those worried about a lack of fresh food during the global COVID-19 pandemic. Contributed photo

It doesn’t seem to matter what aisle you walk down in the grocery store these days, they conjure up images from a dystopian novel.

But there are some things we can do to create more food security for ourselves, family and friends, said Scott Allin, a volunteer with Sustainable Orillia and owner of Aquatic Growers.

Allin has a business growing different kinds of vegetables through aquaponics, which is a hybrid of fish farming and hydroponics, he told OrilliaMatters.

The plants are grown in water that is occupied by fish. The fish are fed a high quality diet and their waste is what feeds the plants. Anyone with a 65-gallon aquarium, some know-how and five fish can grow 200 plants, he said.

If you don’t want to go the aquaponics route, there’s always good old-fashioned gardening, he said.

“We need to look at what our grandparents used to do,” Allin said. “All that knowledge has been lost and we need to get it back.”

There was a time, less than 100 years ago, when we didn’t have grocery stores like we do now, he said. “We grew our own food, we preserved it and we stored it.”

If you are lucky enough to still have grandparents, you should be asking them to share their knowledge with you, he said. If not, the internet is rife with information on how to grow just about everything.

The more space you have to grow things, the better, Allin said, but even if you have an apartment with a balcony or big windows, you can grow your own food.

Herb gardens or tomatoes are common apartment plants, but if you have little viable space available, you can always join a community garden in your area and get your own small plot, he suggested.

“I’ve even heard of farmers leasing out land for people, but I am not sure what the legalities are around things like insurance,” he said. “What happens if someone gets hurt on their land?”

If you have backyard space, your options open up, Allin said.

“Owning a garden is one of the simplest ways to become more self-sustaining," said the Severn Bridge grower.

While you might want to immediately go all in on a huge garden with many vegetables, Allin cautioned against such an approach. Gardening takes time to learn, he said.

“There are plants that are super-easy to grow, like green beans and lettuce.”

You have to make sure your soil has nutrition, Allin said, but augmenting it with things like compost, which you can make yourself, is a good start.

“You can even use your lawn clippings for your compost,” he said, noting compost bins can be purchased or made yourself.

“Kale is also an easy plant to grow, as well as big vining plants like squashes or watermelons,” he said. “Squash do need a lot of water, though.”

Some plants, like tomatoes and cucumbers, require a lot of nutrition in the soil and therefore fertilizer, he said.

“Cucumbers are a little fussy and can also have some issues with bugs," Allin explained.

Allin said his soil doesn’t support root vegetable growing, but if yours is a sandy, light soil, you shouldn’t have too many issues.

“You can even grow potatoes in a five-gallon pail,” he said. “Just drill holes in the bottom of the bucket, add 10 inches of soil, and one seed potato will give you four or five pounds of potatoes.”

Carrots, similarly, will also grow in a pail, he said.

If you’re looking to do some raised-bed gardening, Allin offered some ideas on how to do that as cheaply as possible.

“You can get a 50-300 gallon feed trough on sale for something like $100 for 100 gallons,” he said. Raised beds heat up faster which is better for many plants, but they also require more water than in-ground gardening.

After gardening season is done, your grandparents would have stored their root vegetables and foods like squash in a root cellar or cold room. Some older houses in Orillia may still have the cold room in the basement, Allin said.

While there are some ingenious ideas online for storing your garden bounty, you can always opt to can your vegetables or freeze or dehydrate them, Allin said.

“We also need to stop wasting so much food,” he said. “You’d be surprised at how much less food is wasted if you’ve actually grown the food yourself and know how much time it takes.”