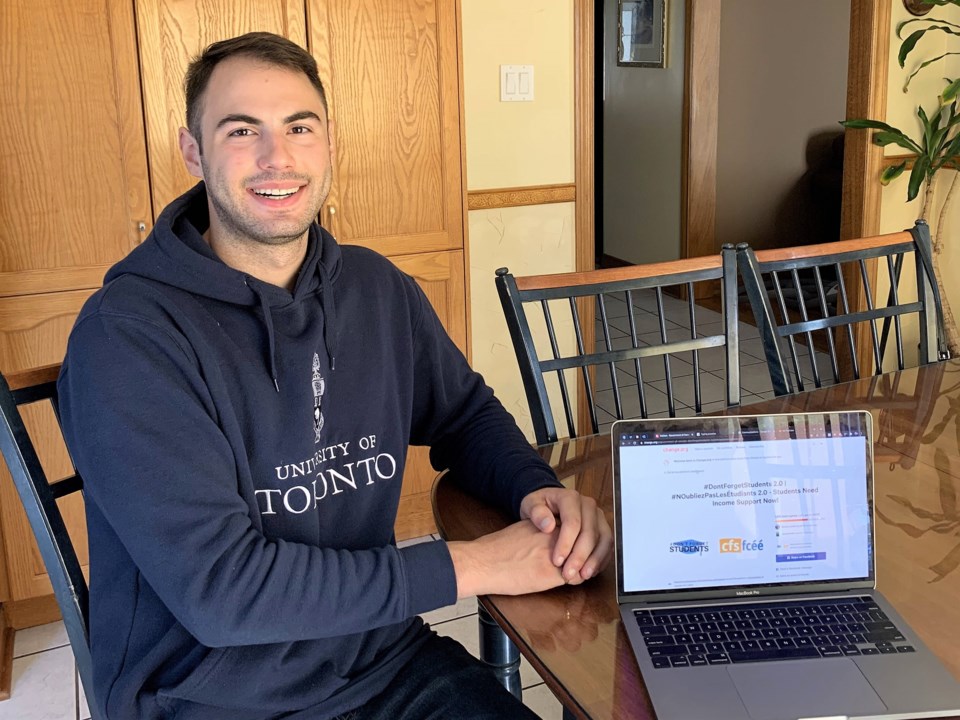 Nicholas Ferreira is a 22-year-old student from Bradford West Gwillimbury and one of the co-founders of the #DontForgetStudents movement. Contributed image

What started as a grassroots movement to help students struggling financially during COVID-19 has turned into a petition boasting nearly 50,000 signatures.

Now, the movement has set its sights on a new goal: to free up student grant money held in limbo due to the WE Charity controversy to get it into the hands of students.

“Our original campaign was called #DontForgetStudents, and part of our renewed ask is in the name of our organization. It feels like the attention is elsewhere. There are some valid reasons for that, to a certain degree, in regards to... this whole WE situation,” Nicholas Ferreira, one of the group’s co-organizers, told BarrieToday.

“It feels like, week after week, there’s always something else that needs to be dealt with. The focus is always elsewhere. No one’s stopping to remember that students are particularly impacted by this,” he added.

Ferreira, 22, is one of the co-founders of #DontForgetStudents, a national movement to urge governments to help post-secondary students through the pandemic.

The Bradford West Gwillimbury resident finished up his bachelor’s degree from the University of Toronto this term, with plans to start a master’s degree in international relations in the fall.

“There was a time where I wasn’t sure if I could do my master's in the fall, because I had trouble finding a job this summer,” he said.

The group started organizing in April with a campaign to have students be made eligible for the Canadian Emergency Response Benefit (CERB).

“It was basically started as something very informal,” said Ferreira.

When the pandemic first started and everything shut down, he felt governments weren’t yet considering that summer employment many students relied on to pay for schooling wasn’t going to be available this year as an option.

“It dawned on me very early on that students were being pushed into financially precarious situations,” Ferreira said.

Ferreira then connected with other students on social media with similar concerns across the country. The organizing group for #DontForgetStudents boasts about eight members from multiple provinces, including the Maritimes and Quebec.

“We started a group chat and just decided, no one else is doing this, so we’re going to do this,” he said.

The group’s first Change.org petition garnered 47,000 signatures within a couple of weeks.

“It’s a real issue that resonated and makes sense to people. It’s the right thing to do,” said Ferreira.

The group felt its first win when, at the end of April, Prime Minister Justin Trudeau announced $9 billion to support students during the pandemic, through the Canadian Emergency Student Benefit (CESB).

“None of us expected for it to be as successful as it ended up being,” Ferreira said.

Students were eligible for $1,250 per month between May and August through the CESB. Those who are looking after dependants could receive up to $1,750.

However, questions were raised as to why students weren’t being given the same amounts as people who applied for the CERB, which comes in at $2,000 per month.

The CESB is set to expire at the end of August.

On June 25, the federal government announced that WE Charity would administer a $912-million Canada Student Service Grant (CSSG), a program promised by Trudeau as part of the $9 billion in COVID-19 aid for post-secondary students.

Eligibility would be determined based on student volunteer efforts throughout the pandemic. Students would have been able to receive between $1,000 and $5,000 depending on the number of volunteer hours worked.

WE Charity was given the federal government contract to administer the grants, but pulled out of that arrangement amid controversy over the involvement of the prime minister's family with WE.

Now, the status of the grants for students is up in the air.

Even as the calendar flipped to August, the student grant program still wasn't up and running yet.

"I can’t imagine a way that it could be set up now,” said Ferreira.

Over the past week, the group has worked to renew their ask of the government through a second petition, to redirect the money they were planning to spend on the CSSG to top up the CESB to $2,000 per month, and extend the CESB for another three months.

The group has also been pushing the provincial government to step up with support, as education is part of their mandate.

“Not even just the Ontario government, but also the B.C. government, Alberta, Saskatchewan... no one’s really come out with any kind of concrete support for (post-secondary) students. We think they should be reducing tuition costs,” he said.

Students welcome 'unprecedented' relief package but seek details
Apr 23, 2020 9:15 AM
Comments
We welcome your feedback and encourage you to share your thoughts. We ask that you be respectful of others and their points of view, refrain from personal attacks and stay on topic. To learn about our commenting policies and how we moderate, please read our Community Guidelines.