No word on when family law cases will resume, although lawyers can file electronic applications to start family law proceedings
Jun 19, 2020 12:30 PM By: Marg. Bruineman 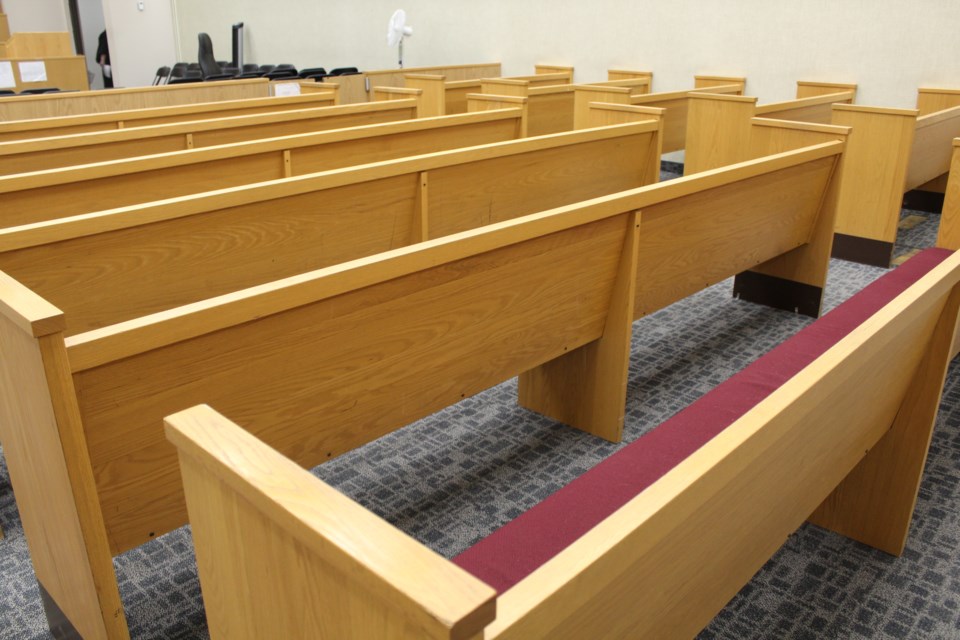 A look inside a Barrie courtroom. Raymond Bowe/BarrieToday

The Barrie courthouse is getting set to creak open its doors July 6 for in the first phase of reopening following a three-month hiatus.

Barrie criminal courts will begin with the resumption of in-person trials and preliminary inquiries.

“They’re only going to have a few courtrooms in Barrie, none of the satellite courts like Midland or Bradford are going to be open so those matters are going to be sent to Barrie,” said Barrie criminal lawyer Gary Pickard, who is president of the Criminal Lawyers’ Association of the County of Simcoe.

“If they only have a couple of courtrooms open, there’s no way they can accommodate everything that’s being set, so the Crown has to prioritize what they want to do first," Pickard added.

Shortly after the provincial government declared a state of emergency related to the COVID-19 pandemic, the court system quickly pivoted, holding some court appearances and hearings remotely, through phone and video conferencing.

Those bail hearings, guilty pleas and appearances are expected to continue to operate remotely, which will help reduce the number of people streaming to the courthouse, said Pickard.

But there is indication that attempts to hold trials via phone or video conference will see some pushback from local criminal lawyers.

“They want us to do a lot of stuff by video remotely and a lot of our members don’t think that’s a great way to do a trial or a preliminary hearing,” said Pickard, adding that credibility in the courtroom is an important aspect of a trial. “At this point, it’s not mandatory that we agree to videos, so I think most of our members insist their trials proceed in person, just as they did before.”

A total of 93 provincially run courtrooms are slated to open across the province in July, including those in three other courthouses in the Central East region — Newmarket, Oshawa and Lindsay — the Ontario Court of Justice announced in an update.

The cases already scheduled for after July 6 are expected to go ahead. Later this month, the court will begin rescheduling criminal trials and preliminary inquiries that were scheduled to be heard between March 16 and July 3.

Although the number of people allowed inside the courthouse and courtrooms will remain restricted, the notice added.  Those experiencing signs or symptoms of COVID-19 or have been advised by a public health official to self-isolate are asked to not go to the courthouse.

Witnesses who have been subpoenaed or ordered to attend court for a trial or preliminary inquiry in Barrie scheduled on or after July 6 are advised to attend unless whoever subpoenaed them tells them not to.

A special COVID-19 trial readiness court has also been established. The phone or video conferences will address all cases currently scheduled for a trial or preliminary inquiry on the Monday before the scheduled hearing date to confirm that the cases are ready to proceed and to assign the cases to a courtroom.

The provincial government plans to continue rolling out court services across the province with a targeted completion date of Nov. 1. The chief justice earlier announced that jury trials will not be held before September.

Courthouses in the Central East region, including Barrie, are not on the list of courthouses that will have in-person family law hearings. Although in an earlier notification the Superior Court of Justice indicated that lawyers could file, electronically, applications to start family law proceedings and motions to change.

While some provincial offences courts are also set to resume, those at Cedar Pointe Drive in Barrie and West Street in Orillia will remain closed. There is no indication when they will reopen.

Ontario confirms 102 new COVID cases today
Jul 15, 2020 10:44 AM
Comments
We welcome your feedback and encourage you to share your thoughts. We ask that you be respectful of others and their points of view, refrain from personal attacks and stay on topic. To learn about our commenting policies and how we moderate, please read our Community Guidelines.