Weekend Wine: You gotta have heart

At least, that’s the focus as this weekend brings us Valentine’s Day. It would be hard not to notice, given that merchants have hauled out the hearts and cupids and encourage us to express our love with a purchase of one kind or another.
Feb 12, 2016 10:57 PM By: Vin Greco 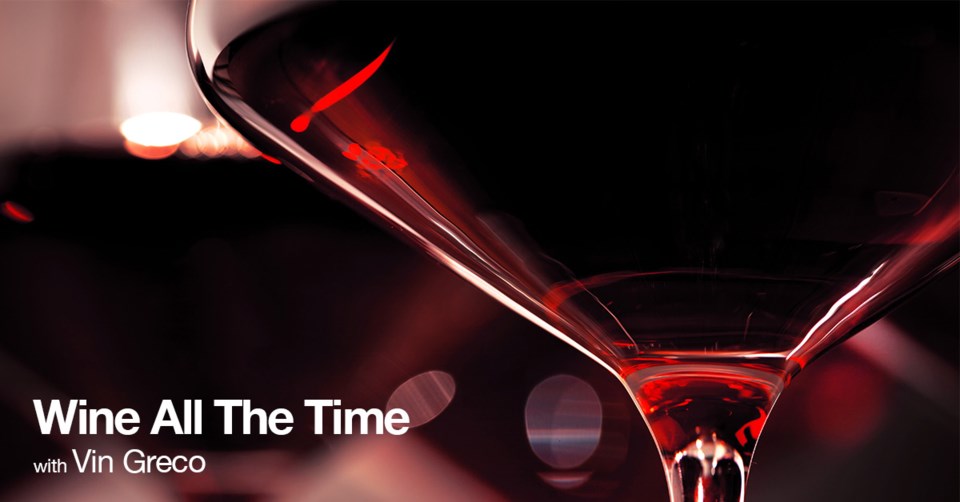 At least, that’s the focus as this weekend brings us Valentine’s Day.  It would be hard not to notice, given that merchants have hauled out the hearts and cupids and encourage us to express our love with a purchase of one kind or another.

The “booze business” is no different, with many products making a limited time appearance in an effort to entice.

Chocolate has long been associated with Valentine’s Day, and this year there are several wine concoctions that attempt to combine chocolate and fruit flavours, as well as liqueurs that play to the theme.

With liqueurs, one of the most intriguing is Sinful Cherry Liqueur, $35, (375 ml.) made by Rheault Distillery in Hearst, of all places.

So right from Northern Ontario there is a charmer that is vodka-based, and both sweet and tart, with luscious cherry flavours along with chocolate, spice and apple notes, according to the LCBO.

I would be tempted to waive the maraschino cherry and put a dash of Sinful Cherry in my Manhattan.

The old standby Bailey’s Irish Cream has a Chocolate Cherry version, $29.95 for the 750 ml. bottle.

As with the regular Bailey’s, the emphasis here is heavy on the cream with a sweet cherry and cocoa note – it reminds me of the Cherry Blossom chocolates we used to enjoy.

This is a very different take than the Sinful Cherry, and could be used to play against dark chocolate, or it could be splashed on ice cream.

Another option in this style is Laura Secord Chocolate Cream Liqueur, $27.95, $2 off the regular price.

This has a milk chocolate emphasis, and some may detect a whiff of cherry or of coconut; at the end, this is chocolate: sweet, creamy and indulgent.

One is the Chocolate Sea Salted Caramel in which the chocolate underscores the caramel, while the other, the Bourbon Dark Chocolate is more emphatically dark chocolate, as the name suggests.

Any of these liqueurs could be enjoyed on their own, or… with Chocolate!

I confess that the flavoured wines don’t strike a chord with me – but I do know that sweeter wines have been grabbing a bigger and bigger portion of the market, especially in the United States.

One such wine is the Gallo’s Apothic Red with 19 grams of sugar per litre.

Now, around Valentine’s Day, it is joined by Apothic Crush Red Blend, $16.95.

In its advertising, we are told, “The first taste entices, stimulating the senses. The next taste ignites, arousing the passion.”  Whoa!  (Is this Viagra in a glass??)

For some reason, the LCBO classifies it as dry – but I wouldn’t bet on that.

I would bet, however, that this will be a winner for those who prefer their wines on the sweeter side.

Available at both the LCBO and Colio outlet stores is Girls’ Night Out Chocolate Raspberry Truffle, just $8.95, and, at 6.5%, it has less than half the alcohol of the Apothic crush.

On a website, “Jenn and the City”, this wine was described as being “Flavoured with all-natural flavours of Black Forest cake and raspberry,” and a “sumptuous sipper.”

For something on the lighter side, and sparkling at that, consider Fresita, a strawberry-infused and refreshing wine from Chile, for $13.95.

This, again, is light in alcohol and not overly sweet. – it would be pleasant served with fresh fruit.

On the drier side, Cono Sur Sparkling Rosé is $2 off at $11.95.  Cono Sur consistently provides some of the best buys in table wine, from their Pinot Noir to their Viognier and their Pinot Grigio.

The Rosé is made from Pinot Noir, and suggest red fruit flavours but is dry, with persistent tingly bubbles. If you want to toast your Valentine, this is a most affordable way to do it.

One of the classic matches with dark chocolate is Port, the fortified dessert wine from Portugal in which some of the sugars are preserved by halting the fermentation through the addition of neutral spirits. Dark, rich flavours result.

The 2010 was awarded a 90 by the Wine Enthusiast magazine.

Putting the sweeties and sparklers aside, there are a couple Spanish reds perfect for the occasion.

From the reliable house of Torres, we have their San Valentin Garnacha, $12.90, complete with a small silver cupid on the bottle’s neck.

Characteristically, Garnacha is quite fruity – suggesting plum or red currant, along with spicy notes, including vanilla.

The finish can be rustic with tannin showing through and potentially some herbal accents.

From just outside Valencia, we have Pasion de Bobal, $16.95.

Using organic farming methods, Sierra Norte has taken  Bobal, a grape generally used for bulk wine, and created a deep, smooth textured wine with spice, dark cherry and chocolate flavours and even a floral note on the finish.  Enjoy it with a meal, or just on its own.  Perhaps it even likes chocolate!

Whether it is a liqueur, a flavoured wine, or something more traditional, you should have no problem finding something to enhance your Valentine’s day plans.

Recently I tasted Torrao, one of the Winerack wines which blends SpanishTempranillo with unidentified Ontario wine.

Currently available at two for $20, it is quite charming, with a good, hearty, but smooth entry, followed up with a softly tannic finish which give the wine its necessary bite.  It would be a good red for “every day”, or for serving to large numbers.

The four wines that appeal to me the most on this release all fit into the dry category, but the one that is the least dry is from New Zealand.  Waimea Pinot Gris 2012, $18.95, will actually come across as off-dry, with peach/apricot flavours at the core, along with honey and spice notes. Acidity and minerality at the back end bring everything into balance, and writer James Suckling applauds its “supple texture and concentrated flavour,” scoring it 92.

While drier, Hugel Gentil 2014, $16.95, from Alsace will still show very appealing aromatics of citrus, lychee, and perhaps pear, and then present a rich texture on the palate and good length – This wine blends many of the grapes associated with Alsace – Sylvaner, Riesling, Musacat, Gewurztraminer, Pinot Gris and Pinot Blanc.  Mr. Suckling awarded this a 90.

Loma Larga Sauvignon Blanc 2014, $16.95, from Chile is said to be right in the middle stylistically, neither tropical or herbaceous.

Winemaker Cédric Nicolle aims for pure and fresh wines that “express the fruit and are easy to drink”.

This Sauvignon Blanc balances the exotics such as passionfruit with the more European apple and melon.

The fruit is there, and so is the underlying acidity to provide good tension.

In the past couple of years, we have been seeing more and more Muscadet Sèvre & Maine wines made from the Melon de Bourgogne grape.

These wines are bracing and crisp, yet have some roundness to them, along with a whiff of salinity which suggests their kinship with the sea, and seafood.

Gadais Père & Fils Vielles Vignes 2013, $15.95, is crafted from the fruit of 80 year-old vines, and made “sur lie” extracting greater depth and flavour from the lees which are stirred up every so often prior to bottling.

Concentrated with citrus and mineral notes, this wine will provide much pleasure now and right through the summer.

Australia is highlighted on this release, and the reds pre-dominate.

I will mention a few of them.

Jip Jip Rocks Shiraz 2013, $16.95, has gold medals from San Francisco and China, and Silver from Melbourne and Great Britain.

Plum and blackberry, vanilla and cinnamon flavours can be noted in a wine that has ample body and depth.

3 Rings Shiraz 2013, $18.95, earned a 92 from the Wine Spectator, which called it “plush and spicy” and “exotic.” Rhubarb, cherry, dark chocolate, anise, and pepper are some of the flavours this evokes, and the finish is lengthy and harmonious.

D’Arenberg is one of the most heavily represented Australian wineries in the LCBO, and their Custodian Grenache 2012, $19.95, is a good example of why these wines are so popular.

Made from old, low bush vines, “The Custodian” sports soft, red and black fruit in a lighter style compared to Shiraz, and has good energy and fine, smooth tannins.

Elsewhere on the release, you’ll find many other attractive reds.

From Sicily, Donnafugata Sedàra Rosso 2013, $15.95, is a blend in which Nero d’Avola is skillfully supported by classic French varietals – Cabernet Sauvignon, Syrah, and Merlot.  It is fresh, lush, and long with the suggestion of cherry and blackberry.  It carries a “James Suckling” 91.

Spain’s Honoro Vera Garnacha released last month was very well received – some is still available in various communities – and now we have Honoro Vera Monastrell 2014, $13.95,which should be equally popular.

In France, Monastrell is known as Mourvèdre, an important grape in the southwest.

This is a smooth, jammy organic version with flavours reminiscent of cherry pie, raisins, ripe plum and even tobacco – Vintages also mentions “garrigue”, the over-play of resinous herbs such as lavender and rosemary. This could be the sleeper of the release.

Les Halos de Jupiter Costières de Nîmes 2013, $17.95, exemplifies all those traits we prize in Rhône reds – garrigue, licorice, black pepper notes, mid-weight, lively, with a long finish and lush texture. It bears an erobertparker.com 88, and will even get better over the next few years.

If you can’t find something I’ve mentioned, don’t despair.

There are many other good wines on this release as well as on the shelves – The Black Chook Shiraz /Viognier from the last release is a good example. Just ask the product consultants for some suggestions.

A conservatory tour of Italy
May 18, 2019 10:00 AM
Comments
We welcome your feedback and encourage you to share your thoughts. We ask that you be respectful of others and their points of view, refrain from personal attacks and stay on topic. To learn about our commenting policies and how we moderate, please read our Community Guidelines.