Remember This?: Wickedness in the Woods - The Story of John Tryon (5 photos)

For one hundred and two years, Canada hanged people. Murderers, rapists and those convicted of treason, including twelve women, took a walk to the gallows in cities all over this land. From 1860 until 1962, this was the law. The old Barrie Jail saw five men hanged and this is the tale of just one of them, John Tryon, the second prisoner to meet the hangman behind those limestone walls. 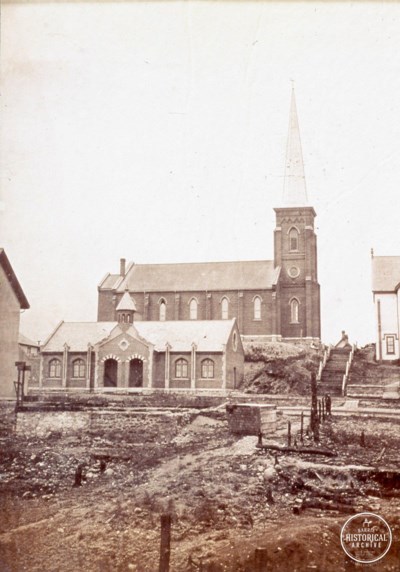 After his conviction John Tryon requested to see Rev. E. Morgan. Trinity Anglican Church, circa 1860s/70s, looking up from what is likely Dunlop St. E.

In the jail’s long history, years or even several decades passed between executions, but for some reason, the first two hangings in Barrie both occurred in 1873. James Carruthers, a farmer from Ivy with an explosive temper made worse by drink, was found responsible for the sudden death of his wife and made the first climb up the wooden stairs at the Barrie Jail in June of that year. John Tryon would follow him in December. 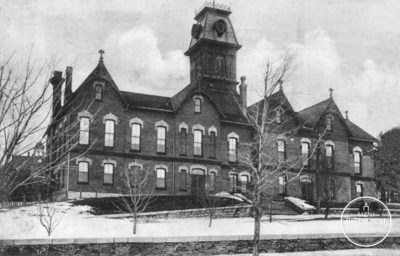 The Barrie courthouse how it looked during that time.

The writing style in old newspaper articles is absolutely fascinating, in my opinion. The headlines and subtitles were always attention grabbers. SENTENCED TO BE HANGED! The reader could expect the story to reveal all sorts of juicy details – graphic details of injuries, witness testimony, idle gossip, speculation, hearsay, personal opinion and all sorts of curious tidbits that would never be seen today. The writer for the September 23rd, 1873 edition of the Northern Advance described the accused as “strongly-built shrewd looking man … who betrayed considerable nervousness during the trial.” while his son, George Tryon, who was then co-accused, as a “pleasant looking young man … certainly ‘the murderer’ was not marked in his countenance.”

The crime took place many miles from Barrie, near an isolated cabin on the shore of Commanda Lake in the Parry Sound District, where the Tryons were trying to eke out a living by trading furs and provisions with the local aboriginal people. The two men partnered with another man named Francis Fisher, who was a German immigrant who had lived for a number of years in New York State before coming to Canada. Mr. Fisher was to arrange all the trading, keep the house and do all the cooking while the other men spent their time hunting. The three met in Collingwood in September of 1872 and sailed across Georgian Bay aboard the passenger steamer Chicora to reach the North Shore area where they intended to conduct their business.

On a cold and starry winter night, the partnership came to a sudden and horrific end when Francis Fisher was found dead several feet from the cabin. Robert McKee, a young man from a neighbouring cabin, would later testify in a Barrie courtroom that George Tryon came to his home and asked that he come quickly because he believed that “Fisher was killed and asked me to go and see.” Young McKee found the body of Fisher lying under several hundred pounds of deer meat that had been hanging from a pole stretched between two trees. It appeared that the dead man had been standing on a sled while attempting to cut a piece of meat for dinner with an ax, but the whole structure collapsed and killed him. 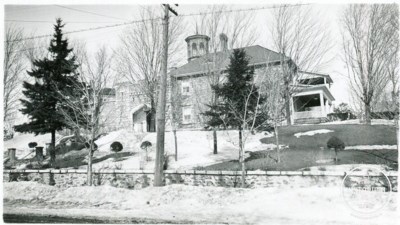 Closer view of the jail, showing lake facing balconies that no longer remain - neither does the view!

The next day, Robert McKee was sent to find some aboriginal men to help bury the body. They returned and buried Mr. Fisher. A few days later, McKee and the Tryons traveled to Parry Sound to report the death. It was not until early April that anyone came to the little shanty in the woods to investigate the death, but the cold weather had preserved the body of Fisher quite well, so a lot of telltale evidence still remained. Even as the science of forensics was still in its infancy, it was quite easy for Dr. John E. White of Parry Sound to tell wounds made by falling meat and tree limbs from those made by an ax. John and George Tryon were arrested and charged with murder.

No witness saw the final altercation, or ever knew the three men to ever have any quarrels among them. The most damning evidence came from the hundreds of dollars, in American, Canadian and in gold, found on the men when arrested, when no person could ever recall them having money of their own previously. In the end, the verdict was guilty and the judge gave them the only sentence he could – death by hanging.

“I must sentence you as the law directs, which is, that you, John and George Tryon, be taken hence to the place whence you came, and from thence to the place of execution on the day of 16th December next, and there be hanged by the neck until dead, and may God have mercy on your souls.”

On September 22nd, three days after their conviction, John Tryon requested to see Rev. E. Morgan of Trinity Anglican Church. He then confessed to the minister that the murder was all his doing, and that George knew nothing about it. He also said that his motive was not about hate, and not about greed over Fisher’s money, but a rather odd reason was given. He said that George’s wife was due to give birth in Barrie any day, and that George was going to be leaving him behind to go to Barrie. In John Tryon’s twisted thinking, Francis Fisher’s ‘accidental’ death was somehow supposed to keep George from going to Barrie. 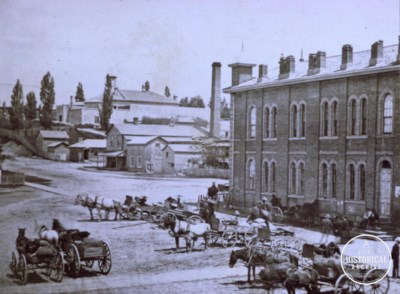 George Tryon was freed and John Tryon kept his date with the hangman at the Barrie Jail.

Each week, the Barrie Historical Archive provides BarrieToday readers with a glimpse of the city’s past. This unique column features photos and stories from years gone by and is sure to appeal to the historian in each of us.

Trending in Remember This?

Train for FREE in December