Remember This? The dawn of family camping in Barrie

Early tourist operations were seen as appealing only to the poorest class. One Barrie alderman likened one such spot to 'a squatter's camp'
May 10, 2017 12:00 PM By: Mary Harris
Previous Next
1 / 1 A cabin at Lakeside Cabins on Blake St. circa 1940. Barrie Historical Archive
Expand
Previous Next

After the hardships and austerity of the Great War, Canadian families increasingly began looking for ways to enrich their lives and to find some sources of relaxation.

This was something new. Up until this time, ordinary folks toiled their lives away, resting only on the Sabbath, and only the wealthy took trips or went on sight-seeing excursions.

The 1920s brought a new outlook. Could working families escape the city heat, noise and clatter to rest by a cool lake, despite owning no luxurious summer house?

The answer to that question came in the form of the tourist camp. They began to spring up everywhere, much to the delight of cash-poor holiday-makers, but to the horror of local governments who had no idea how to regulate them, and to the disgust of the well-heeled who saw this as crude living bordering on vagrancy.

“My personal experience is that these grounds form nothing more than a squatter’s camp,” Barrie Alderman Wallwin was not very happy about a tourist camp that had popped up on the northwest corner of Rodney and Blake Sts. in 1924. 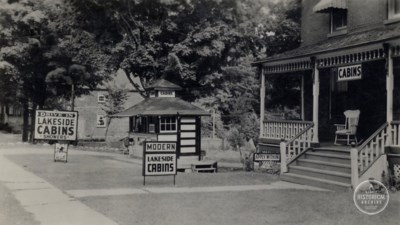 Claude Pearce, a Toronto alderman, had come to give his opinion to Barrie Council, as his city had been dealing with the same issue.

“The poorest class of people only use them.”

Pearce did not seem to understand that people might actually enjoy cooking over a fire, or sleeping under the stars. Camping for enjoyment was still a rather novel concept and he concluded with “The better class, who leave money in town, do not frequent these places. They put up in hotels.”

That first camp was shut down, likely bylawed out of existence, by council. It would be a number of years before anyone attempted to open another tourist camp in the Town of Barrie.

Barrie was one of the last communities to jump on the tourism bandwagon and share their magnificent bay with would-be short-term vacationers. In 1931, camping in tents or cabins had become so popular in Ontario that the provincial government printed a brochure listing all the towns with tourist camps, complete with a key to amenities – showers, a store, fishing, canoe rentals and more.

Barrie wasn’t in it.

A short piece in the ‘Norther Advance’ in 1937 showed that we were finally catching on. Tourism revenue was of particular importance during the Depression years.

“There are all classes of people among tourists.” Aha, now they got it! “Tourists want something different than what they have at home.”

The first location that Barrie put forward for a tourist camp was Rogers Park which is what the locals called the piece of swamp in the area of Bradford, Ellen and John Sts. and east to the bay.

Some suggested that this might not be the best place for a camp as the lake in that area was sometimes unpleasant for swimming. Two years later, the town suggested this same area as a potential location for a new dump.

Private tourist camps began to open in Barrie with three in the East End catering to travelers from all over Canada and the United States.

They were clean, had proper running water and toilets, offered rustic but modern cabins and all sorts of family entertainment, had ready access to swimming and fishing and adhered to all the bylaws.

Finally, the time had come for the town and the campers to find common ground. Our beautiful bay brought the tourists, and the tourists brought their money.

The glory days of the urban campground were chiefly in the 1940s. By the 1950s, Ontario had begun rapidly expanding its inventory of Provincial Parks.

They too offered modern amenities and allowed weekend warriors to venture outside of towns and trek into the woodlands of the province without feeling completely cut off from the civilized world.

Not much remains of Barrie’s old tourist camps. The main house belonging to the Lakeside Cabins still stands at 89 Blake St., now surrounded by modern homes rather than tiny cabins. The Homestead Camp nearby is nowhere to be seen.

The only half-way recognizable camp is the former Wonder Valley located on Penetanguishene Road just outside of Barrie, now the home of Earth and Sky Connection.

Each week, the Barrie Historical Archive provides BarrieToday readers with a glimpse of the city’s past. This unique column features photos and stories from years gone by and is sure to appeal to the historian in each of us.

Trending in Remember This?