When things go a little squirrelly 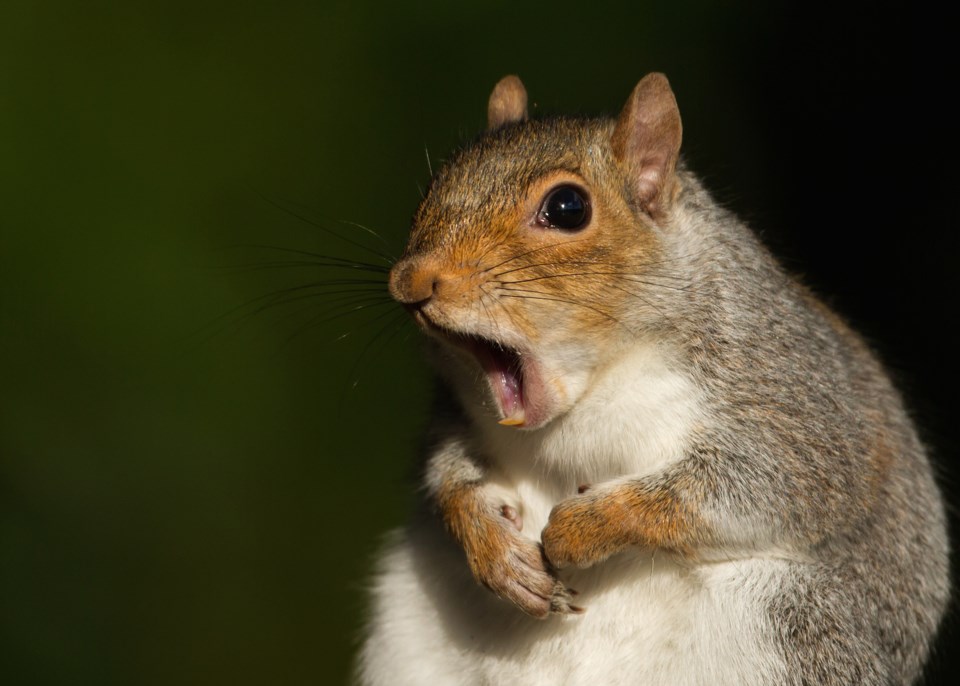 Let me assure you that none of what you are about to read has been in any way embellished for storytelling purposes. I wouldn’t have believed it had I not lived through it.

Turns out squirrels had managed to move in to my attic.

The only thing to do is call a pest control company, which I did. They had been asked to call ahead, so I felt comfortable answering the door. They also did that. So far, so good.

The two men who arrived also took their boots off before heading up to my bedroom closet where the trap door to the attic is.

However, once inside, one of them locked my front door behind him.

I admit I watch too many Netflix documentaries, but that freaked me out! I waited until they went upstairs and threw my front door wide open.

Note to any repair person: Never ever do that! It's creepy and it's chilling.

The gentlemen (who were very nice) put up a ladder and peeked up into the attic.

All I heard was (expletive expletive). This is not what you want to hear when anyone is in your house to fix something.

It turns out the squirrel had eaten a hole the size of a man’s arm through the roof and there was a nice big opening with some snow and rain coming in.

They asked for some tin foil. I think that was to put rodent repellent on, but for all I know it was to wrap up their lunch. I don’t know because they didn’t explain.

Did they see a squirrel(s)? Was there a mess up there? A stockpile of nuts? How do they know the squirrel is away for the day and not just hiding?

I know they don’t know because they never went up into the attic. They simply peeked over the trap door.

I remember saying, “So, am I done with you guys now?”

Apparently, I was as they gave me back my tin foil.

This made it less of a pest issue and more of a roofer issue.

I was grateful that, on a Friday and an icy one at that, the condo’s chosen company would come to my rescue.

Here’s where it gets fun.

Three men show up. My cat took one look, hissed and ran to the basement. I wish I could have followed him.

So, they think they can fix the hole from outside. They lean up a ladder.

I was in my doorway explaining what I had learned from the other experts.

As I did that, the giant ladder was caught by the wind and fell sideways into my neighbour’s driveway. Let’s just say if his vehicle had been there, we would have been awaiting Dennis Haysbert to show up in his chair to ask, “Are you in good hands?”

I was actually concerned for their safety and suggested another day might be better.

No, I was assured they had it under control now as one man gave the other a lesson in proper ladder holding... just before it fell down again.

As this was happening, Man No. 3 was still in the truck looking for his hammer.

Once located, he put said hammer into a Walmart plastic bag to scurry up the ladder. (Aren’t there tool belts for this?)

He climbed up onto the roof. He couldn’t locate the hole. (The man-sized arm-sized hole.)

Finally, the other two came inside to check from the closet trapdoor.

“Do you have a ladder?” (Why, do I have to have a ladder, a hammer or tin foil. Why don’t you have the necessary tools to do your job?)

I dug out the ladder, which was not tall enough to get them up high enough to see. While one balanced on the top rung, the other steadied it and they tried to snap a picture of the hole with a phone.

How many men does it take to locate one hole?

The answer would be three.

I can hear you now. Cut to the chase. Did they get rid of the squirrels? Did they fix the hole?

As I write this, I have no idea.

That’s because when I went out front to check on the progress, everyone was gone. No ladder, no tools, no truck. Just gone.

To be fair, I was later contacted by the condo company who said they’d be returning as they had found another hole.

They did return and then as fast as they arrived they left again.

I still don’t have a clue if the roof has been repaired properly. I haven’t been snowed on. I haven’t heard the pitter patter of critter feet, so I am assuming so.

Why would they not knock on the door and fill me in?

The whole thing was like a Keystone Cop routine.

None of them ever went into the attic? That’s the first thing I would have done.

Who is now squirrelly? That would be me!