Take me to the fair

Hot dogs on a stick, jumbo vegetables and bingo make for a welcome trip back in time in this edition of Everything King
0
Sep 3, 2019 1:00 PM By: Wendy King 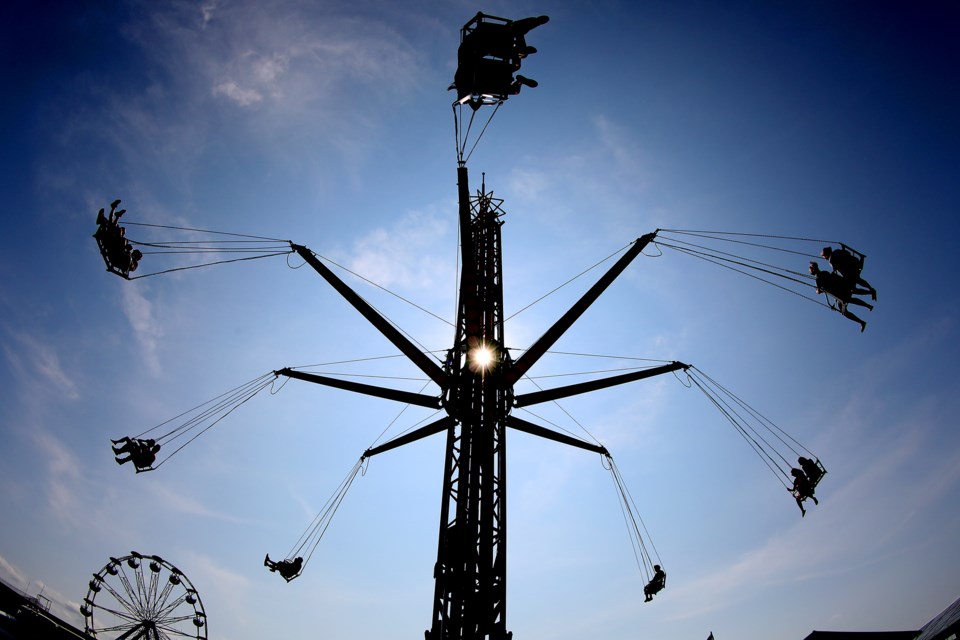 Revellers take part in the annual Barrie Fair at the Essa Agriplex in this file photo. Kevin Lamb for BarrieToday

Yearning for a simpler time?

I found the answer.

Take in a late summer/early fall fair in your community.

Lots of them are coming up.

Nothing wrong with the just finished CNE, of course, but for a rural vacation from the harsh realities of life, try an old-fashioned country fair.

I went to one to finish off the last unofficial weekend of summer and came away completely charmed.

We threw caution (and the diet) to the wind and sampled fair food. I had what I think was my first Pogo (breaded hotdog on a stick, also known as a corndog). Delicious!

Then we needed the obligatory kettle corn and cotton candy.

Then, we washed that down with the $6 glass of freshly squeezed lemonade. There is something about a cute little lemon-shaped kiosk that leads you to forget you just paid $6 for lemonade.

I think there's a spell that falls over a person at the fair.

What prompted us all to buy jam? It's like we’ve never seen jam or honey before.

There were no “Vegg-a-matics” or magic sponges, but there was the essential “weight loss miracle potion” booth. This one promises to offer amazing energy, lessen joint pain, help with insomnia, thicken my hair and make my skin all shiny. There is nothing it can't do!

How many of my group fell prey to the snake-oil salesperson? Out of six of us: six.

Here’s a helpful fair tip: Once you buy jumbo bottles of diet juice, you have to lug it around all day. That’s likely part of the weight-loss plan.

Of course, you don’t have to buy stuff to enjoy the culture of the fair.

There was a bingo tent. I haven’t played bingo in years. This was ‘corn bingo." Pull up a chair and get three weathered cardboard cards for a dollar. No fancy dabbers. Nope, kernels of corn to mark the card.

I felt transported back to Mayberry with Opie, Andy, Barney, Thelma Lou and Miss Crump. We found ourselves excited about the anticipation of the $11 jackpot. We all lost, but came away completely enthralled by the simplicity of it all.

We were there on the wrong day for "Bossy Bingo." This is where a grid is painted in a pasture and the cows (after a large meal) do what comes naturally. You bet on the number where the deposit is made and... BINGO!

Then came something we city slickers had never heard about: the pie auction.

Over the loud speaker we kept hearing the auctioneer’s call, “one give me two… two give me five… sold for 500!”

"Did they just say $500? What kind of pie is it? Is it in a golden plate? Did a Hollywood star bake the pie? Will George Clooney feed me the pie? Why is it worth so much?"

We were about to be educated that this is a 165-year fair tradition where the pies, which have already won “best in fair,” are then auctioned off for charity.

I know that’s not the point. It doesn’t even matter what kind of pie it was. This is how the community raises money for the next edition of the fair. Plus, the pie makers become local celebrities.

We enjoyed the arts and crafts building and the horticultural section.

We went in search of the biggest melons and pumpkins.

The lines were way too long for the Ferris wheel and I was so happy about that. Here were hundreds of young people who were not on their phones, but out with their friends going on rides. They were talking and laughing. It was pretty awesome.

We enjoyed a fabulous Elvis performer at the grandstand.

Then a final trip to pet the cows, pigs and sheep. I loved them all except that sneaky one who tried to grab my popcorn.

It was wholesome, simple and friendly.

I came home to news of an active shooter in Texas and a hurricane pounding the Bahamas, and the horrible fatality numbers from another Labour Day weekend on the provincial highways.

I prescribe for us all a little break from reality.