COLUMN: Want an attraction? Bring back The Breast!

In this week's Everything King, Wendy stays abreast of the discussion around the city's controversial (Heart) Barrie sign
Jun 22, 2021 1:00 PM By: Wendy King 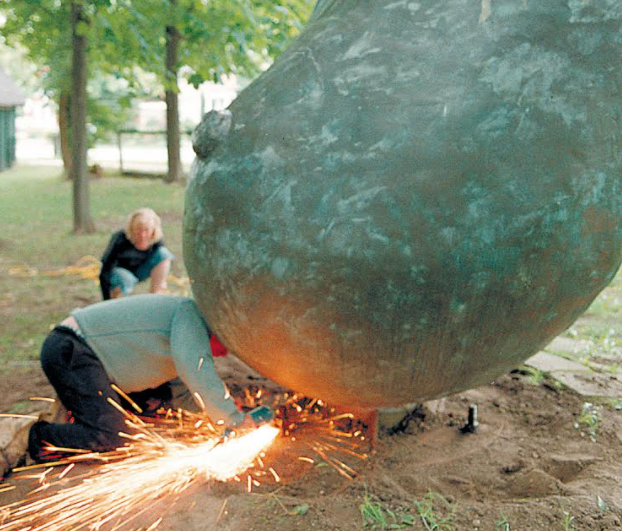 In this photo from the 1990s, John McEwen grinds down one of three one-inch bolts fastening 'The Breast' into position at the former MacLaren Art Centre on Toronto Street as its creator Marlene Hilton Moore looks on. Ian McInroy for BarrieToday

Barrie was once the home of a giant boob.

If you’ve lived in the city since 1993, you will remember the nine-foot sculpture at the MacLaren Art Centre.

The Breast used to be outside the art gallery's former location on Toronto Street. I don’t actually know what it was supposed to mean, but it was always referred to — in my social circles anyway — as the big boob. But beware what comes up when you do a Google search on that!

The city has always offered up some interesting art work, like the Spirit Catcher and the Sea Serpent.

Fast forward to years later when a trio of crates were installed at Barrie City Hall in what was to represent a soap box. Some $30,000 was spent for the grouping of three powder-coated boxes. At least I understood the message of those. It suggested the importance of free speech and 'standing on your soapbox'.

Then, you also have to remember the welcome signs coming into the city with the slogans 'Well Played' and 'Well Connected,' which were removed in 2020.

I never liked those.

What did they really mean? Was that our identity? It was so nondescript.

And here we are in 2021 discussing if we should have a giant sign down by the waterfront that says — wait for it — 'BARRIE' with a heart icon.

I was watching coverage of Barrie city council last week and sat through what turned out to be an extended discussion about this sign. That was more like 12 hours in the last couple weeks.

I understand it is the passion project of Coun. Mike McCann and he is most definitely all fired up about it. He pitched it like it was the cure for COVID. It was hard not to get excited about it. He was animated, engaged and energized. He has promised to do all the fundraising and get it done by October.

He thinks Heritage Park is the right location and believes it will lift the morale of the citizens.

Mayor Jeff Lehman suggested it's been done before and the city should come up with something more unique.

I realized that was my feeling, too.

It was fun when Toronto did it years ago. Then Kingston. Then Ottawa.

Surely, with the technology of today, someone can come up with something a bit more exciting.

Flashing lights, rays shooting from the letters. Synchronize it to music?

Maybe it should be portable so the city doesn’t have to worry about looking after it in the winter?

To be fair, there are to be no taxpayer dollars going into the project, which has been given tentative approval based on fundraising.

It will be paid for through donations, so there’s no issue with that. BarrieToday has reported there will be $15,000 added to the city budget to deal with winter maintenance and any possible graffiti removal.

The design is still to be determined, so that means you should expect a lot more discussion.

I don’t want to be a Wendy whiner. It’ll be fine with me if we get it and fine if we don’t. Will it send me rushing downtown to snap a picture and lure me into local businesses? I doubt that.

Entice new business? Likely not on its own.

But, if people would enjoy it as a backdrop to their pictures then that seems positive. What’s the harm?

If it could be used to market the city, that's a plus, too.

Listen, the welcome mat at my house says 'Go Away,' so take my ideas with a grain of salt, but I’m just going to put this out there: If we really want to put Barrie on the map, then I say BRING BACK THE BOOB!

I can guarantee it will bring out the picture takers. We can make that go viral on social media in no time.

I’ve even got the slogans:

Trending in Everything King (with Wendy King)