ETFO says the government has not addressed the union's concerns surrounding classroom violence at the bargaining table
0
Jan 24, 2020 12:20 PM By: Global News 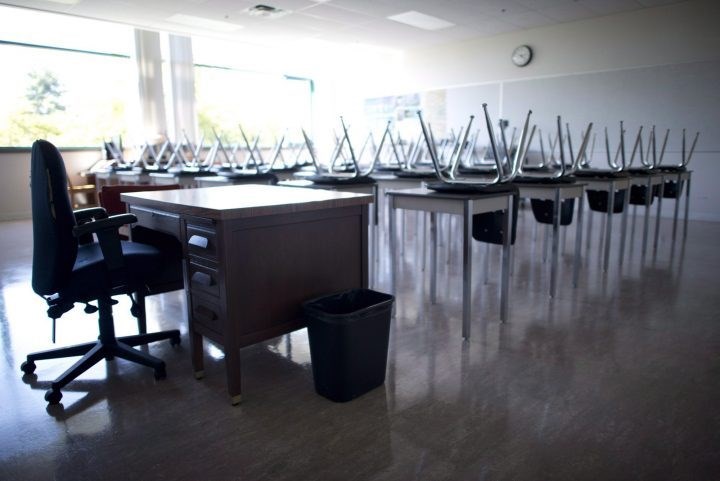 Student violence in the classroom is something that John Brown says he experiences “regularly.”

“At least every week or two, there’s something,” Brown, whose name has been changed to protect his students’ privacy, told Global News.

The Ontario public elementary teacher said he’s been kicked, punched, stabbed with a pencil, spat on, hit with a chair — the list goes on.

“When you have a violent student in a class or one who’s known to be violent or one who’s violent on a regular basis, [and] I’ve had a number of them, you’re on edge constantly,” Brown said. “So you’re not coming to school and focusing on teaching and helping all the kids. You’re coming to school going, ‘OK, how can I avoid people getting hurt today?'”

Members of the Elementary Teachers’ Federation of Ontario (ETFO) are currently pursuing rotating strikes at school boards across the province. The elementary teachers’ union has identified addressing classroom violence as a key concern, in addition to maintaining smaller class sizes, more supports for students with special needs and preserving full-day kindergarten.

How common is student violence in Ontario classrooms?

“Almost 80 per cent of our members have reported violent incidents in schools,” Karen Campbell, ETFO’s first vice-president, told Global News. “The recent cuts to public education are only helping to escalate those matters.”

According to Campbell, schools are struggling to provide adequate support and services that address “high-risk behaviours.”

“Our members are saying that we need to lobby this government to invest in the education system by allocating additional funds, so hiring guidance counsellors, social workers, child- and youth-care workers, and additional funds for mental health support and also timely assessments for students,” Campbell said, adding that the discussion surrounding smaller class sizes also relates to classroom violence.

According to a recent study from the University of Ottawa, violence against educators in the past 12 years has increased almost seven-fold, with 54 per cent of educators reporting experiences with one or more acts of physical violence during the 2017-18 school year.

The study, which was conducted by professors Darcy Santor and Chris Bruckert, found that rates of harassment and violence from students are higher among educators who identify as racialized, disabled, women or LGBTQ2.

“We describe this as an escalating crisis,” Santor, a psychology professor at the University of Ottawa, said of student violence in the classroom.

“There is absolutely nothing that gives me hope that this is going to stop anytime soon. We’re not resourcing this issue appropriately.”

According to Santor, there are policies around inappropriate behaviour, but these aren’t being implemented in a manner that would actually curtail it — and that’s taking an increasing and lasting toll on educators.

The University of Ottawa study shows that 25.1 per cent of educators who reported a significant incident of harassment in the 2017-2018 school year took time off work.

“If a teacher takes time off work, it affects not just the teacher but the entire classroom,” Santor said. “I don’t think teachers ever sign up with the idea that they’re going to be exposed to harassment and violence on an ongoing basis throughout every single year of their careers.”

What does classroom violence look like on a national scale?

For the rest of the country, the situation is not much better, according to Shelley Morse, the president of the Canadian Teachers’ Federation.

“There isn’t a school in Canada that doesn’t experience some type of violence in their school or witness violent acts, whether it’s student to student or student to teacher,” Morse told Global News.

“I, for quite some time, have called it the silent crisis because we are directed by our boards not to report the incidents of violence, and that causes quite a bit of alarm and distress for teachers because it’s seen as though violence isn’t looked at as a significant problem in our schools.”

If a child is perpetrating violence and harassment in the classroom, a teacher can address the issue with the kid’s parent, according to Morse, but it’s a different story if another parent asks about violence that their child may have witnessed in class.

“If a parent comes in of another child and says, ‘My child is complaining about this happening,’ we’re not allowed to address [it] or make parents aware that this is happening in our classroom,” Morse said.

Why does student violence occur?

Student violence in the classroom can happen for a number of reasons, but to put it simply, Santor said a lot of it has to do with kids acting on their frustrations, which there can be many of.

“They’re getting frustrated, and they have, for a number of reasons, learned that you can express frustration in a way that is other than just using your words.”

Moreover, students can resort to violence when they’re trying to say something about a breakdown in communication or relations with a teacher, according to Aparna Mishra Tarc, an education professor at York University and teacher educator.

“I think that what makes violence really, really tricky in the classroom is that it is so subjective,” Mishra Tarc said. “Schools should really, really try to promote environments of engagement and meaningfulness.”

“In Ontario, there are some programs right now to teach social, emotional learning skills in elementary schools and in high schools,” he said.

“Although we’ve made a great start, we need to be doing more of this.”

How is the provincial government addressing the issue?

When it comes to addressing student violence in the classroom, Alexandra Adamo, a spokesperson with Ontario’s Ministry of Education, said the government has invested more in mental health, special education funding for students and de-escalation training for staff.

“Schools must be safe, inclusive and welcoming places – not only for students and their families, but for the entire school community,” Adamo said in an email.

“We know there is more to do to improve the safety of students and staff. In the voluntary agreement that we reached with CUPE (Canadian Union of Public Employees) in 2019, the government restored the Local Priorities Fund and hired over 1000 front-line workers, who are keeping classrooms safe for all students.”

But according to Campbell, the ETFO’s first vice-president, the government has not addressed the union’s concerns surrounding classroom violence at the bargaining table.

“There has actually been really no engagement around that critical topic, and we have put that on the table,” she said.

“We want this government to get back to the negotiation table. We want the minister to give his team a new mandate and a mandate that includes addressing issues of class composition and lower class sizes, addressing the caps in all grades, looking at also investing in resources… so that we can meet the needs of our students.”

For Brown, the rate of student violence in the classroom has increased since he started teaching over 20 years ago.

“In my 21 years of teaching, I would say easily in the first five to seven, I maybe got sworn at or punched once or twice,” he said.

“In the last seven or eight years, it’s constant.”