BEYOND LOCAL: Turning off outdoor lights in spring and fall could save money and migratory birds 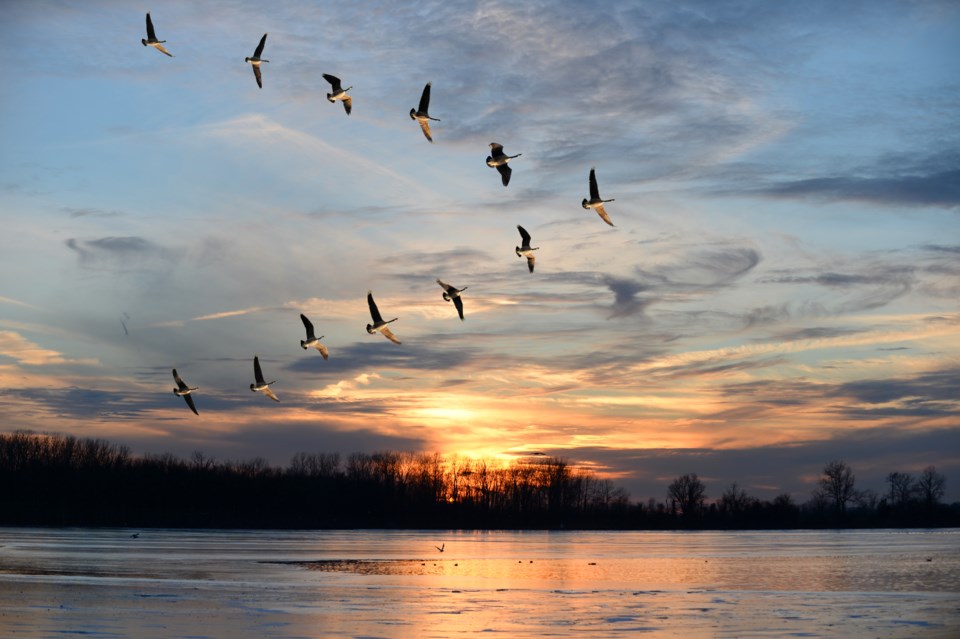 Billions of migratory birds pass through the night sky each spring and fall. Birds use stars to orient their journey between summer breeding grounds and winter feeding grounds. The artificial lights produced by humans disrupt the migration of birds, often with fatal consequences.

The dangerous impact of artificial lights from towers and skyscrapers have long been known to scientists. Birds are drawn to the artificial lights that occupy their airspace, and their navigational compasses are short-circuited by the unusual presence of light. A well-lit high-rise building can kill hundreds of migratory birds in a single night, and it’s common to find thousands of lifeless birds at the base of skyscrapers after a busy period of migration.

What about ground-level artificial lights that shine up from our backyards and buildings? Might these artificial lights also have negative consequences for passing migrants? And how could we benefit birds if we turned out the lights?

In my research laboratory at the University of Windsor, we study the ecology and conservation of birds using bioacoustic tools such as sound recording and sound playback. Birds produce an extraordinary diversity of sounds that allow us to locate them and study their behaviour. By eavesdropping on bird vocalizations, we can learn about bird movements and social activities, even under cover of darkness.

Many species of nocturnal migrants produce vocalizations when they are in active flight. These short and simple calls are known as flight calls, and they are thought to play a role in communication between birds within migratory flocks. Many flight calls are species-specific and therefore we can identify which type of birds are passing overhead at night. By recording these calls, we can measure the biodiversity of migrants simply by pointing microphones at the night sky.

Recently, we used bioacoustic recordings of flight calls to study the effects of artificial light on migratory birds. We focused on ground-level artificial lights, the kind of lights that many of us use to illuminate our porches or driveways, or to provide landscape lighting in our backyards.

During fall migration, my student Matt Watson and I collected recordings of the sky at 16 pairs of sites near Lake Erie. Each pair of sites included a dark location with no artificial lights and a nearby location with a back porch light or street lamp. We recorded from sunset to sunrise and then tallied all of the flight calls in every recording. We used these data to ask the question: Does the presence of ground-level lighting change the behaviour of birds moving overhead?

Observations of birds at the 9-11 memorial in New York City, Tribute In Light, reveals that ground-level lights can distract migratory birds. Our recordings suggest that a similar phenomenon occurs even with backyard lights. Whatever the mechanism, our results are surprising and alarming, because they teach us that even low-powered outdoor lights change the behaviour of migratory birds overhead.

A new study was recently published on the effects of ground-level artificial lights on nocturnal migrants. For 40 years, researchers at the Field Museum have collected dead birds from the base of well-lit buildings on Chicago’s waterfront. Over this time, they found more than 35,000 dead birds next to the windows of a single ground-level building.

Motivated in part by our bioacoustic studies of the effects of artificial light on migratory birds, the authors of the Chicago study asked an intriguing question: Are fatal window collisions related to the calling behaviour of birds?

The authors found a striking pattern. The bird species that were killed most often were the species well-known for their behaviour of producing calls during migration. The species that appeared rarely at the base of lit windows were species that are not known to produce flight calls.

For example, the most common birds collected after a fatal window collision were white-throated sparrows, dark-eyed juncos and song sparrows. All of these species produce flight calls. In contrast, warbling vireos, blue-grey gnatcatchers and eastern phoebes were rarely found dead next to lit windows, even though these animals are common nocturnal migrants in the Chicago area. None of these species produce flight calls.

This suggests that the propensity of bird species to produce flight calls is connected to the risk of birds making fatal collisions with artificially lit windows.

This new finding raises the possibility that some bird species are especially susceptible to these deadly traps. A passing migrant that is distracted by artificial light may produce a flight call. That flight call may attract other passing migrants, bringing them closer to danger. In this way, the negative impacts of ground-level lights appear to be especially severe for birds that routinely produce flight calls.

Turning out the lights

A clear and growing scientific consensus teaches us that artificial lights have a negative impact on migratory birds. Amid the many other threats facing birds during the current biodiversity crisis, the impact of artificial lights can be mitigated by an easy change to our own behaviour: the flip of a light switch.

In spring and fall we should turn off our outdoor lights at night. With the lights out, we can take the opportunity to stand outside and listen to the night sky. We’ll hear the sounds of a billion animals moving across the continent with less distraction from our light pollution.

WATCH: Ontario expands COVID-19 testing, regional reopening of economy being considered
May 29, 2020 12:30 PM
Comments
We welcome your feedback and encourage you to share your thoughts. We ask that you be respectful of others and their points of view, refrain from personal attacks and stay on topic. To learn about our commenting policies and how we moderate, please read our Community Guidelines.