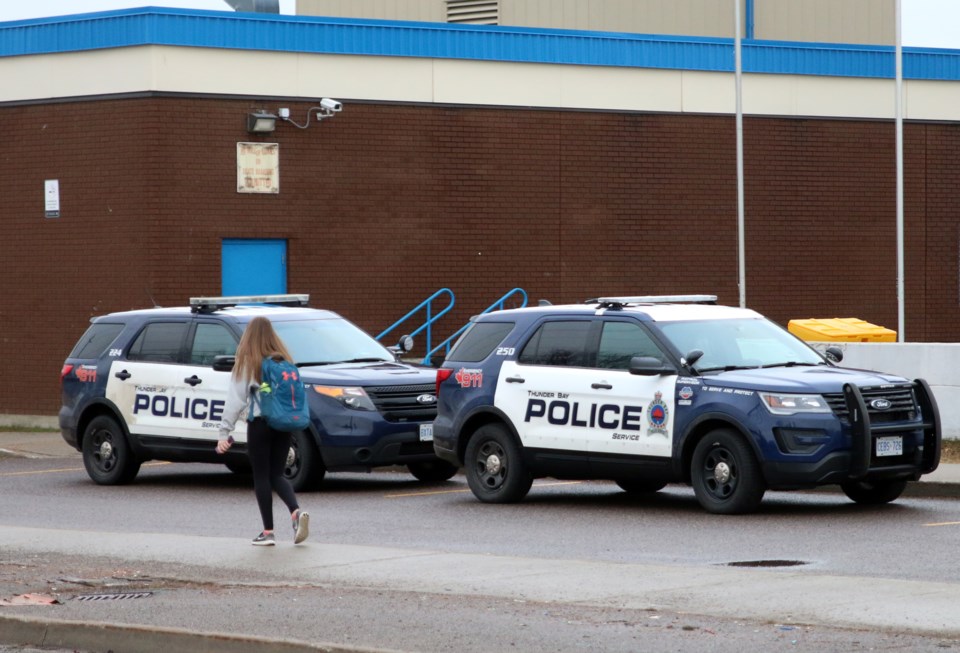 THUNDER BAY - In the last six months, Hammarskjold High School has received 10 anonymous threats that has resulted in the closure of the north side school eight times and students, parents, and the community all want answers as to who is doing this and why.

Frank Cormier, a criminologist and head of the Department of Sociology and Criminology at the University of Manitoba, said determining who and why is not that simple, but when looking at past incidents, threats like these are often done as a form of attention seeking.

“Someone just enjoys making a phone call and sitting back and watching the flurry of activity and response to it,” he said. “It gives them a feeling of power or control by watching people jump to their whim.”

However, the situation affecting Hammarskjold is unique in that it has involved continuous and repeated threats. It also expanded on Tuesday to include Superior Collegiate and Vocational Institute.

“Usually it’s a onetime only thing where the person gets whatever it is out of their system and then they stop,” Cormier said.

“The problem is, if it is someone who wants attention and see the chaos they can create with a phone call, responding each time is sort of giving them what they want. It’s gratifying to them, so they might say: that was fun, I’ll do that again.”

Cormier said it is difficult to say who might be responsible for these threats, be it a current or former student, an adult, or someone with a grudge against the school. Anything is possible, Cormier said, but the possibility that it is being perpetrated by someone outside of the city or country, or being used as a distraction, is very unlikely.

It is also difficult to say whether these threats carry serious intent to do harm or not. Sometimes people have more serious intentions, but do not follow through with any actions.

This places police and the Lakehead Public School Board in a difficult position. Cormier compared it to a child exhibiting attention seeking behaviour. If the child receives the attention sought, it reinforces that behaviour.

“Obviously there is a lot more at stake,” Cormier added. “If someone was to follow through and authorities were seen not to have done anything, then that would be seen as a major problem.”

The Lakehead Public School Board said the decision to close the school is based on the information of each individual threat and is done so for the safety of students and staff. Police have said the threats received have involved planned shootings and explosives inside the school.

Frustration and fear among students, families, and the community is growing but according to Cormier, these incidents can have both negative and positive effects.

“The negative side of something like this is that people’s fear is heightened, they don’t feel as safe or secure in their hometown or neighbourhood or school,” he said. “It’s got to be very rough for students to be that little bit on edge when they are in school.”

“Those feelings tend to go back to normal over time. Fear of crime and feelings of insecurity tend to go up and down, very often with media stories. They are not generally tied to the actual level of danger anyone is in. They are tied to perceptions of more notable cases.”

However, when something like this happens in a community, schools, parents, and municipal leaders can come together to try to better understand why this is happening and what can be done.

“They may ask: Is someone angry, are they feeling excluded, are they isolated, so is there something we can do about that?” Cormier said. “They might hold sessions in the school, assemblies that can tend to draw people together.”

“Often when something bad happens, it brings people together to talk about what happened, what can be done about it, and that can reaffirm the shared beliefs we all have in terms of right and wrong, and that can be a positive thing for a society, a town, or a school.”

Thunder Bay Police continue to investigate the threats and have set up a dedicated tip line at 684-5001. Investigators asked for patience from the public as the investigation continues.

Given the threats are anonymous in nature, Cormier said he understands the position police are in and the little information they have to use.

“I certainly wouldn’t blame police if they are unable to find who it is,” he said. “I’m sure they are using any means that they do have, but they probably just don’t have many.”

And that may be the conclusion to this entire situation, as unsatisfying as it may be for the public.

“If it is the same person or even if it is multiple people, I suspect like virtually all of these things, it will just stop, it will not happen again, and no one will ever know who it was,” Cormier said.

About the Author: Doug Diaczuk

Doug Diaczuk is a reporter and award-winning author from Thunder Bay. He has a master’s degree in English from Lakehead University
Read more