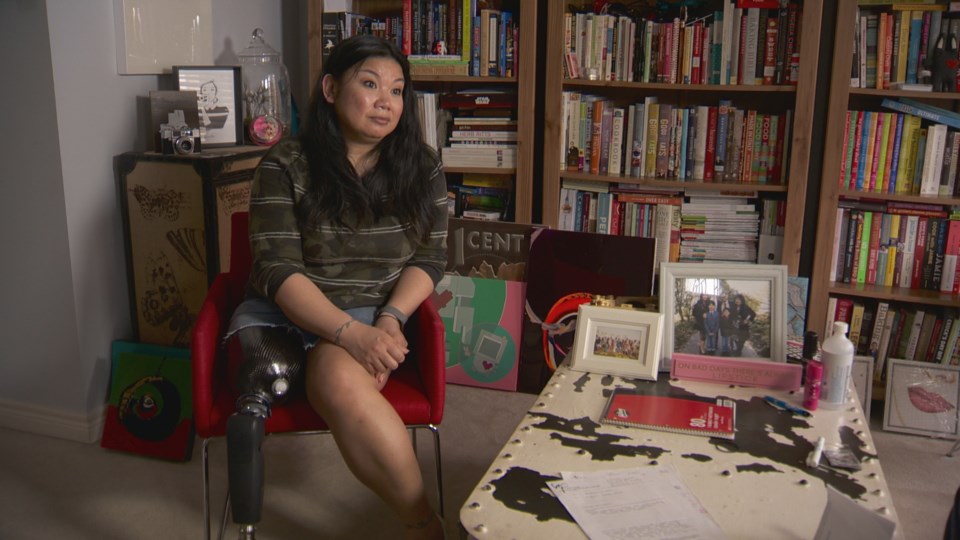 In the first instalment of a Global News series exploring the Canadian health-care system, experts are calling attention to a framework they believe is decades out of date.

When Patty De Guia lost her leg to cancer months after giving birth to her third child, she expected Canada’s universal health-care system to give her the tools to recover. It never did — instead leaving her bankrupt, legless and suffering from severe depression.

Today, with help from family, friends and strangers, De Guia has a new lease on life to go along with her new prosthetic. But she questions how a system designed to help everyone equally left her to fend for herself.

Today, he says, the statistics show a system in disarray that is leaving the country’s most vulnerable citizens to make life-and-death choices. According to Law, more than two million Canadians don’t take prescription drugs as prescribed because they can’t afford it.

“It’s a horrible decision to have to make to have to choose between your health and your heat or your health or your food,” he said. “It’s not something that one expects from a country where everyone thinks we have universal health care.”

De Guia learned that first-hand as costs quickly spiralled out of control. While in hospital, her chemotherapy drugs were covered, but after being discharged, she was told to use lower-dose chemo pens at home that cost $4,000 apiece and were only partially covered by private insurance. And that was before getting fitted for an above-the-knee prosthetic leg.

“I had no clue that (prosthetic) legs were so expensive,” she said. “I just thought it automatically is taken care of for you, especially if you have insurance, and then you would get the best leg for your lifestyle. I mean, I was a mother at the time, and it didn’t make sense to have something that’s a pipe and a hinge because I’m never going to keep up with my kids.”

Indeed, the leg provided to her was, in essence, a loaner. It cost $10,000, of which she had to pay $2,500 out of pocket, but she had to give it back once she was able to purchase a more permanent option. Because Ontario’s public health insurance plan doesn’t cover prosthetics, she was on her own, and the leg her doctor recommended at the time cost $50,000.

Unable to afford such a high cost, De Guia used a wheelchair, crutches and her one good leg to move around for nine years while dreaming of walking her kids to school. It wasn’t until neighbours set up a GoFundMe page that she was able to raise enough money to buy a suitable prosthetic for almost $90,000.

When medicare was first conceived in the 1960s, there was an intense debate over what would and wouldn’t be covered. Ultimately, the Liberal government decided to exclude services outside of hospitals and doctors’ offices. But perhaps the most critical decision was to not fund pharmacare. Today, pharmaceutical prices in Canada are the second highest in the world after the U.S.

“Well, there’s a theme there, which is that (father of medicare) Tommy Douglas always said that there are two dangers for medicare,” said health policy analyst Michael Rachlis. “The first is public payment. And we don’t have public payment for drugs, and that means at least 20 per cent of Canadians who should have had a drug didn’t take it last year.”

Funding pharmacare would be expensive. Rachlis says there are estimates that upwards of $10 billion would have to be added to the tax base, but he also counters that it could yield almost the same amount in savings.

“There’s money to be saved, both in negotiating better prices with the drug company in particular and the opportunity to have more effective, efficient prescribing,” he said. “But we’re not going to be able to get them if we don’t have a public scheme.”

In the first instalment of a Global News series exploring the Canadian health-care system, experts are calling attention to a framework they believe is decades out of date.

BEYOND LOCAL: Having a boy or girl doesn’t run in the family, study says
Feb 21, 2020 9:25 AM
Comments
We welcome your feedback and encourage you to share your thoughts on this story. We ask that you be respectful of others and their points of view, refrain from personal attacks and stay on topic. To learn about our commenting policies and how we moderate, please read our Community Guidelines.